It seems to be yesterday when my adventure as a PhD student at University of Leeds began. In a blink of an eye, I’m already in the second year! As I explained in my previous blog, the aim of my PhD is to develop biosensors and insert them into microfluidic platforms. Briefly, a biosensor is a system that detects and quantifies biomolecules, in my case, bacteria. Right now I’m doing my first secondmend in Hull putting biosensing and microfluidics altogether.

Currently, the majority of biosensors are based on the use of antibodies or antibody-based proteins to detect pathogens. However, a new biosensing development perspective came up when Ina Meuskens, ESR4, came to Leeds for her secondmend. Given that the first-step bacterial infection is due to adhesins-extracellular matrix (ECM) protein interaction, why not to use those proteins as a bioreceptor in order to attach bacterial adhesins?

We put the idea into practice. The bacteria to be detected was E.coli, which expressed a particular adhesin found in other bacteria, Yersinia. This adhesin is called Yersinia Trimeric Autotransporter adhesin (YadA). It’s known for its strong affinity to collagen, which is a well-known ECM protein (for more information about YadA see blog ESR4). For that, I’ve been looking for the best optimal conditions for the collagen attachment onto the electrodes surface, and a subsequent test of its ability to capture bacteria. It’s taken some time, but eventually I’ve achieved it! The results show that it’s possible to detect bacteria based on adhesin-ECM protein interaction. Nevertheless, there are some points to be considered and improved about this novel biosensor. For instance, that the detection using collagen is one order of magnitude bigger than when using antibodies. Besides, the experiments have been done using PBS buffer, but moving the system to real fluid samples will probably complicate the success due to the huge unspecific binding onto collagen.

Now that the biosensor has proven to be working, how can I keep on improving my system? How can I increase the reaction sensitivity  and try to make it happen in the shortest time possible? Besides, how can I reduce the reagent consumption to a minimum, while making the system portable and as cheap as possible? Here is when microfluidics comes up! And that is the reason why I’m currently doing my first secondmend in Hull. I came here in the middle of September and I’ll be here until the Christmas holidays. The objective is to move the biosensor system into a microfluidic device and find the optimum conditions. Right now, I’m on the first stages of this, and I’m really looking forward to having my biosensors properly optimized onto a microfluidic platform! 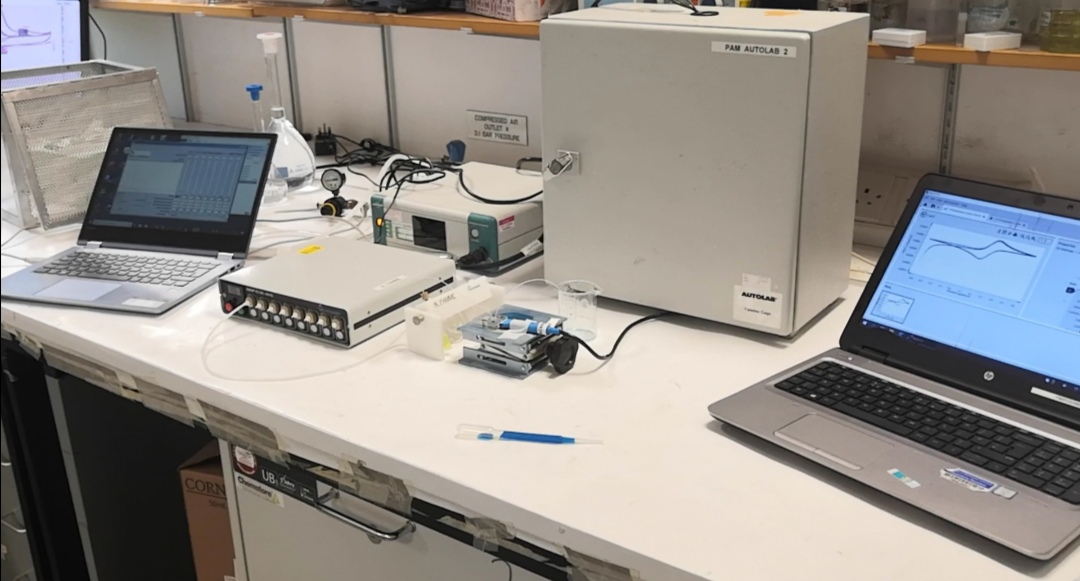 My Hull’s lab bench with the electrochemistry and microfluidic instrumentation altogether. 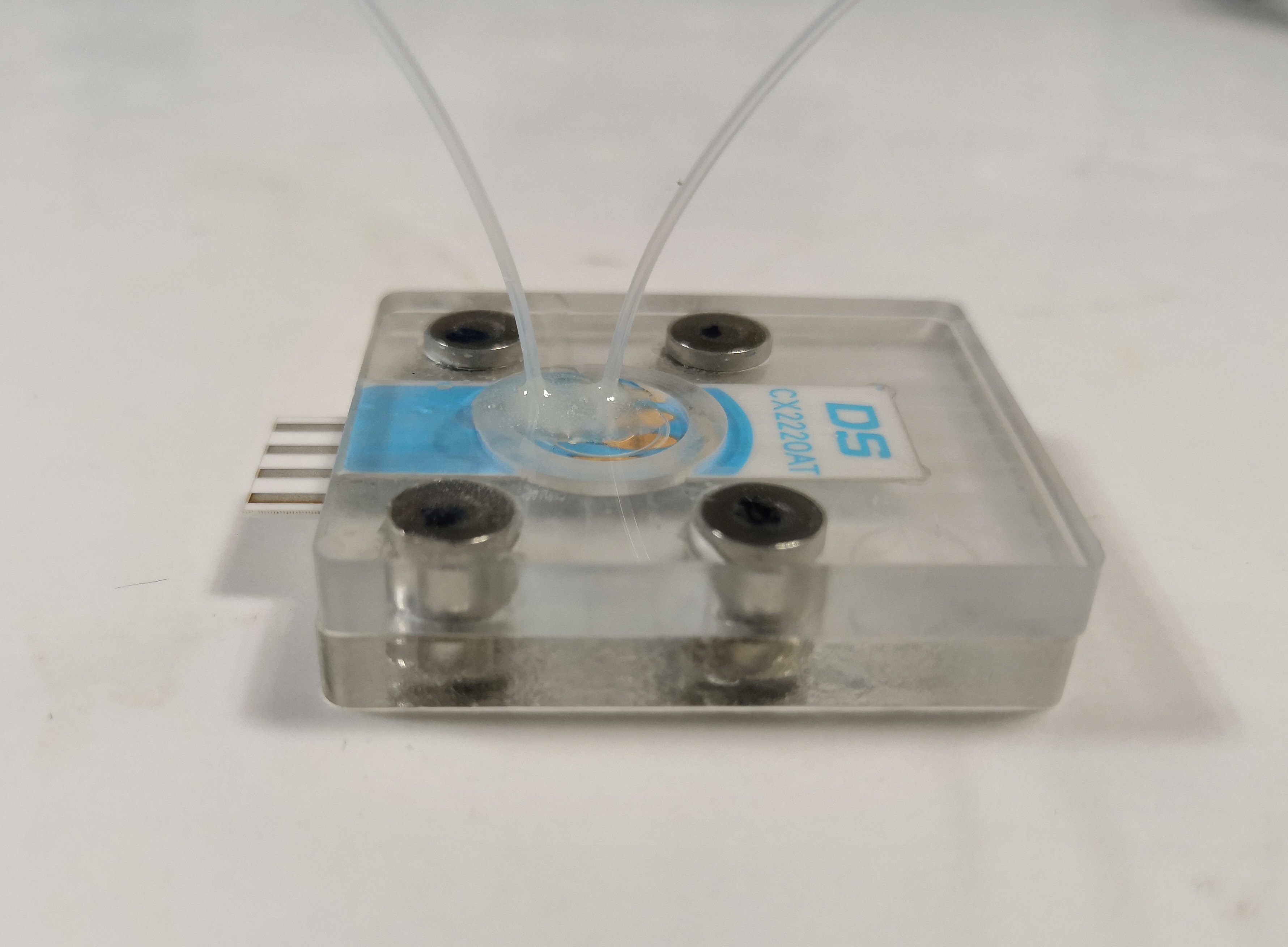 One of the electrodes I use inserted into a microfluidic chip.

Out of the lab!

Aside from laboratory, I’ve also done other science stuff. I took part in the Scarborough science and engineering week 2019. There, Nicole Pamme’s PhD students and I taught science to the very small kids, particularly about microfluidics by doing some interactive games. Also, I assisted the Surface Modification for Chemical and Biochemical Sensing Congress in Poland. There, I learned very helpful electrochemistry for my PhD and I made interesting contacts. Among them, some PhD students who were using the same electrodes and electrochemical techniques as well. Before starting my PhD I had already worked in biosensors, but not in microfluidics, which seems to be both very promising and challenging. Just to finish, I’m about to end my secondment in Hull and I’m looking forward to Christmas, which is just around the corner! 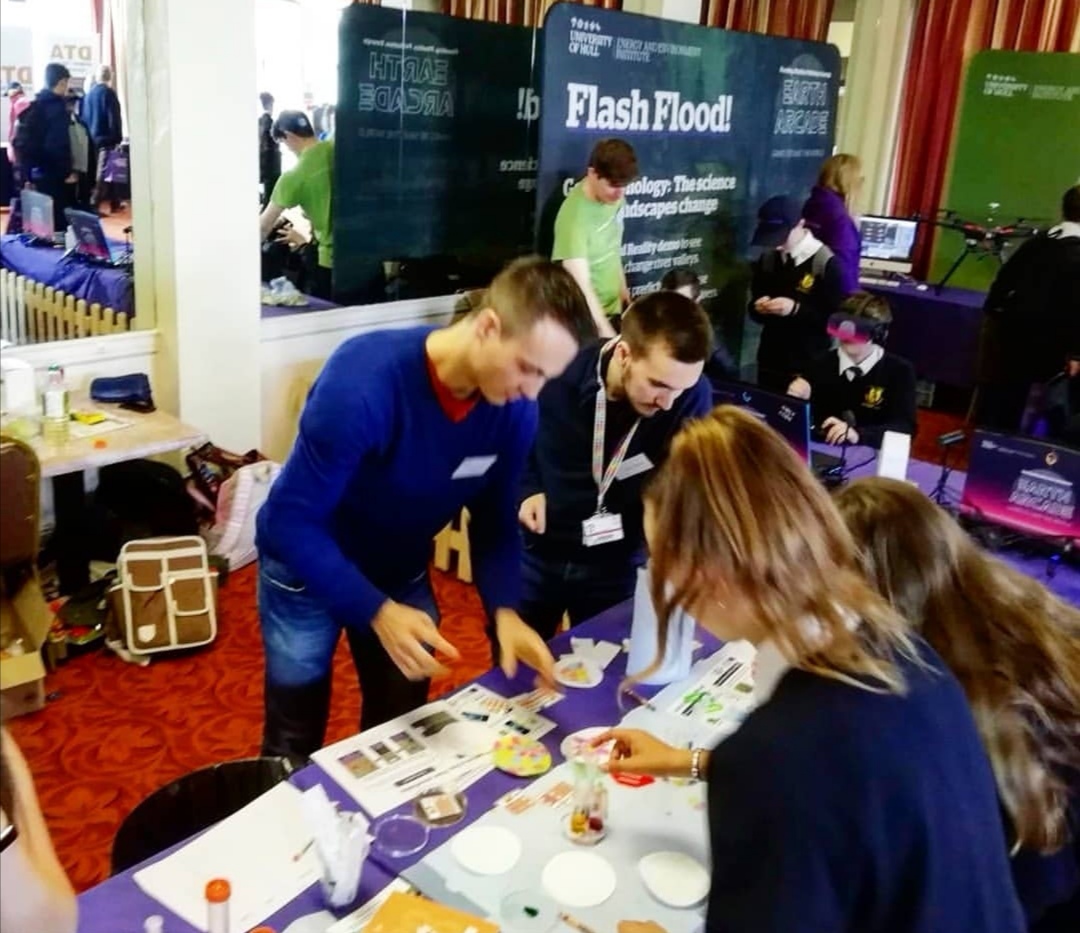 Pablo and I teaching kids about microfluidics in Scarborough.

Group picture of the electrochemistry congress in Poland.