Diving Deep into the Whole Genomes of Pathogens during Infection Outbreaks

Microbiological diagnostics is an important tool in combating emerging pathogens that seem to be able to withstand antibiotic-mediated killing by phenotypic and genetic adaptation. This is a rapid and mostly small-scale adaptation (i.e. point mutations can generate full resistance to certain antibiotics) and this necessitated a shift towards sequence based approaches without losing clinical implications of conventional microbiological techniques. 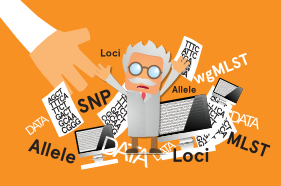 Whole genome sequencing (WGS) has become an affordable solution for the investigation of genetic changes occurring in multidrug-resistant bacteria, the identification of genetic determinants of antimicrobial resistance, and epidemiological typing of clinically important pathogens during infection outbreaks. Being a bio-informatician, I am focused on to perform epidemiological analysis such as multi locus sequence typing (MLST),  whole genome based MLST (wgMLST) and identification of single nucleotide polymorphisms (wgSNPs) etc. for high-resolution strain characterization. Recent technological advancement facilitates genome wide association studies (GWAS) to determine hidden links between genotypic and phenotypic traits of sustainability, virulence and antimicrobial resistance in pathogenic clinical strains belonging to species such as Staphylococcus aureus, Clostridioides difficile and Pseudomonas aeruginosa. Handling of whole genome data is quite complex and requires decent programing skills from accessing available software scripts to writing specialized scripts to deal with biological data manipulation, simplification and interactive representation to convey the essential information.

One of my research projects was to analyze clinical strains of S. aureus collected from the Erasmus Medical Center, Rotterdam, The Netherlands. S. aureus is a common opportunistic human pathogen associated with increasing drug resistance, morbidity, invasive disease and mortality in humans as well as animals. S. aureus persistently colonizes the nasal epithelium of 30-50% of healthy humans worldwide. Adherence to the nasal epithelial cells is a prerequisite step for S. aureus to begin colonization and at later stage to opportunistically cause lethal infections such as deep abscesses, endocarditis, osteomyelitis, pneumonia and bloodstream infections. Focus of this study was to analyze core genomic mutational changes occurring in S. aureus strains during natural and artificial nasal colonization periods ranging between 1 to 36 months. The aim was to define whether or not S. aureus, during colonization, adapts to changing conditions in the host and what the adaptation rate was during stable colonization. This study suggest an epidemiological cut off value of on average 18 core genome SNPs as a marker of S. aureus strains identity during infection outbreaks.

Clostridioides difficile (C. difficile) is an anaerobic gram positive bacterial species that can survive at high temperatures, in ultraviolet light, in the presence of toxic chemicals, and during frequent exposure to antibiotics. Toxigenic strains of C. difficile can be a lethal cause of C. difficile infection (CDI) which is commonly associated with diarrhea. The increasing incidences of CDI and rapid evolution of antibiotic resistance in C. difficile over the decades has become a global threat to public health. Diagnosis of C. difficile infection (CDI) and its treatment are highly dependent on species-specific characterization which has traditionally involved PCR ribotyping for epidemiological purposes. So, I have attempted to develop new single step procedure of strain characterization based on De Bruijn graph-based Genome Wide Association Studies (DBGWAS) using WGS of five hyper-virulent C. difficile ribotypes (RT) RT001, RT017, RT027, RT078 and RT106 collected from Creighton University, USA and public repositories. A total of 47 new discriminatory genotyping markers were identified by focusing on features other than the conserved ribosomal region of C. difficile genomes. This new approach for C. difficile genotyping was successfully tested against a larger dataset of 2425 C. difficile genomes of 132 different ribotypes extracted from Enterobase.

In the past two decades P. aeruginosa has become a global threat due to its rapidly emerging high antibiotic tolerant lifestyle. Now, I am working on carbapenem non-susceptible P. aeruginosa (CNPA) strains from an Indonesian hospital. Major goal of this project is to study epidemiological correlation between the isolates on the basis of conventional MLST, wgMLST and wgSNPs. Detailed SNP quantification to reframe the transmission paths of the P. aeruginosa within the hospital from patient to patient, healthcare instruments to patient or environment to patient etc. have been investigated. Additionally, GWAS using 5 different antibiotic resistance profile of these CNPA and 672 additional P. aeruginosa strains from already reported study will be carried out to discover new possible resistance determinants.

An entirely new experience of social distancing and the global fear of the novel Corona Virus Disease (COVID -19) is the highlighted talk of the town worldwide. Even in this real time biological crisis, whole genome based epidemiological analysis of COVID-19 isolated from a corona infected patient are being chosen by many researchers to understand the novelty, rapid transmission and evolution of this global pandemic disease. Therefore, also in this easily recognizable field, WGS is becoming an undebated technology to answer every biological question and have the potential to provide benchmark information to tackle such kind of future global outbreaks.