A bit of background

About a one year and a half ago I started to write a new chapter in my life. I was awarded a Marie Curie scholarship to carry out a PhD project as part of the Viral and Bacterial Adhesin Network Training (ViBrANT). In my previous blog, I tell you a bit more about me and about the process I followed to get involved in this thrilling story. 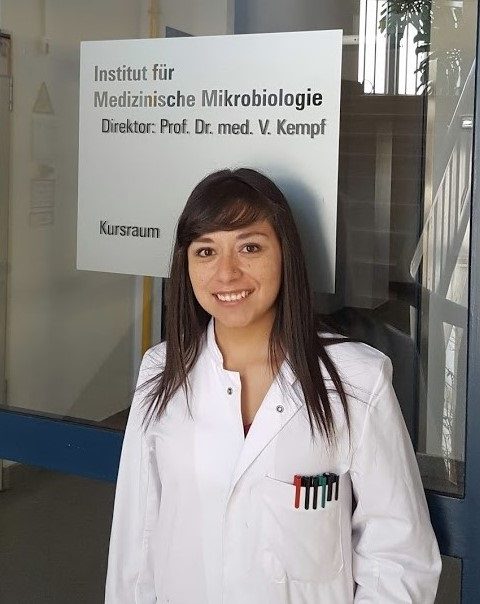 At the Institute for Medical Microbiology. Frankfurt am Main – Germany

Why focusing on pathogen adhesion?

Scientists have a difficult task when fighting against infectious pathogens. This is mainly because these elusive micro-agents have developed strategies to hide from the human protective system (immune system), have acquired hidden skills to develop drug resistance (antimicrobial resistance), and have adapted overlapping tools to reach their main target… our cells.

But scientists do not give up in the search for alternative treatments and more successful approaches to fight against infectious pathogens. Among these novel approaches, comes the idea of blocking the first and critical step of infection: pathogen adherence to the target human cell. It sounds like an interesting idea, does not it? Preventing the pathogen from anchoring to the human cell would allow the clearing out of the infective agent by a more “natural” way, preventing the occurrence of disease. But applying this approach to combat disease is a bit more complicated than it sounds. The purpose of my project is to add some information in this field, by describing the mechanisms involved in this pathogen attachment to human cells using a bacterial model. 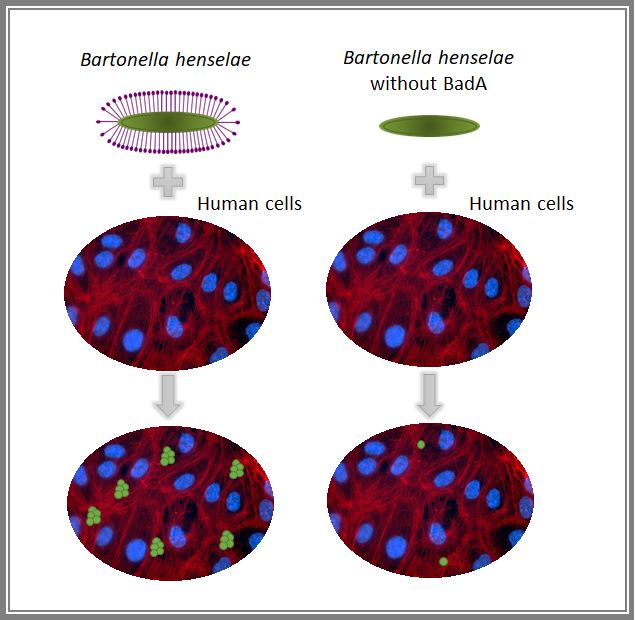 Looking for strategies to interfere with the pathogen anchoring to the host cell is challenging, and this is mainly because bacteria pose a toolbox with plenty of instruments dedicated to this purpose. If one of them fails for some reason, the bacterium has a spare one to replace its function.

Now, it is transcendental to develop a better understanding of the bacterial adhesion process if the aim is to prevent infection through the inhibition of bacterial anchoring to human cells. Here is where Bartonella henselae (the agent responsible for cat scrats disease) comes into play. Previous research has described that by removing just one instrument from its toolbox, a protein called BadA, Bartonella reduces significantly its ability to attach to human cells. This fact makes Bartonella an interesting model to study the feasibility of blocking bacterial adherence to prevent and treat infections. 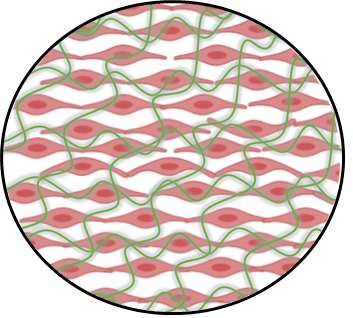 In the adherence process, bacterial proteins use a “collaborator” coming from the human cells… Do not get me wrong, it does not mean that human cells are helping in the infection process, but bacteria take advantage of structures that are already present in our cellular environment. Bacterium sticks to these structures via different biochemical mechanisms to avoid being washed out of our body by natural mechanical forces present in our tissue environment.

These human partners are mostly extracellular matrix (ECM) proteins. The ECM are structures present on top of our cells and whose normal function is to organize the cells in the tissue. These structures are the perfect target for bacterial adherence because they are distributed everywhere on all tissues. Among the group of ECM proteins, we have fibronectin, a protein that has been previously described as a “sweet target” in the adherence process for many other pathogenic bacteria.

How to start unraveling the puzzle for bacterial adherence?

So, putting this together we have two possible participants in this bacterial adhesion process, BadA a bacterial protein from Bartonella and fibronectin a structural protein from the cellular environment. However, we still do not understand how exactly these two proteins interact, and if by blocking this collaboration, we will be able to stop the disease. This is the moment when knowledge and creativity play a role to solve the puzzle. If it were your chance, how would you do it? 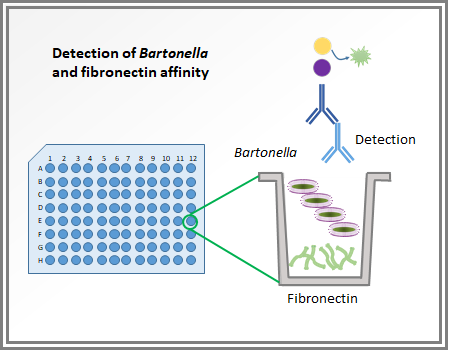 Test for detection of Bartonella adherence to fibronectin

During this one year and a half, I have tested different approaches to study where these two complex proteins interact (BadA and fibronectin). To do so, I chopped one of these proteins into shorter pieces to assess which fragment is crucial in the bacterial adhesion process. Fortunately, we found that when a section of this protein is missing, the bacterial binding is reduced.

But is fibronectin the only structure important to support the adhesion or is Bartonella interacting with other human proteins? To answer this question, I used genetic tools (CRISPR Cas) to remove fibronectin from human cells. The idea of this test was to confirm the importance of this cellular collaborator by a loss of function approach. The results have shown that when human cells do not have fibronectin, Bartonella reduces its attachment to the host cell.

So far these are very interesting results. We have identified sections important for BadA and fibronectin interaction, and we have also proved that fibronectin is an important collaborator in the bacterial attachment to the human cell. But, will we be able to prevent the infection by blocking this interaction with targeted drugs? Will the bacterium bring another instrument from its toolbox to replace the failed one and continue the infection?

Many steps still to come…

There is still a lot to do, with the knowledge generated so far we are in the way to describe the path that Bartonella follows for adhesion. For the next steps, we want to block these specific protein regions using synthetic molecules (anti-ligands) to prevent disease by inhibiting Bartonella binding to human cells.

The knowledge generated from this project is expected to provide some insight into the application of binding inhibition approaches in the treatment of infectious diseases with a difficult prognosis.

Many collaborators in the creative/knowledge process 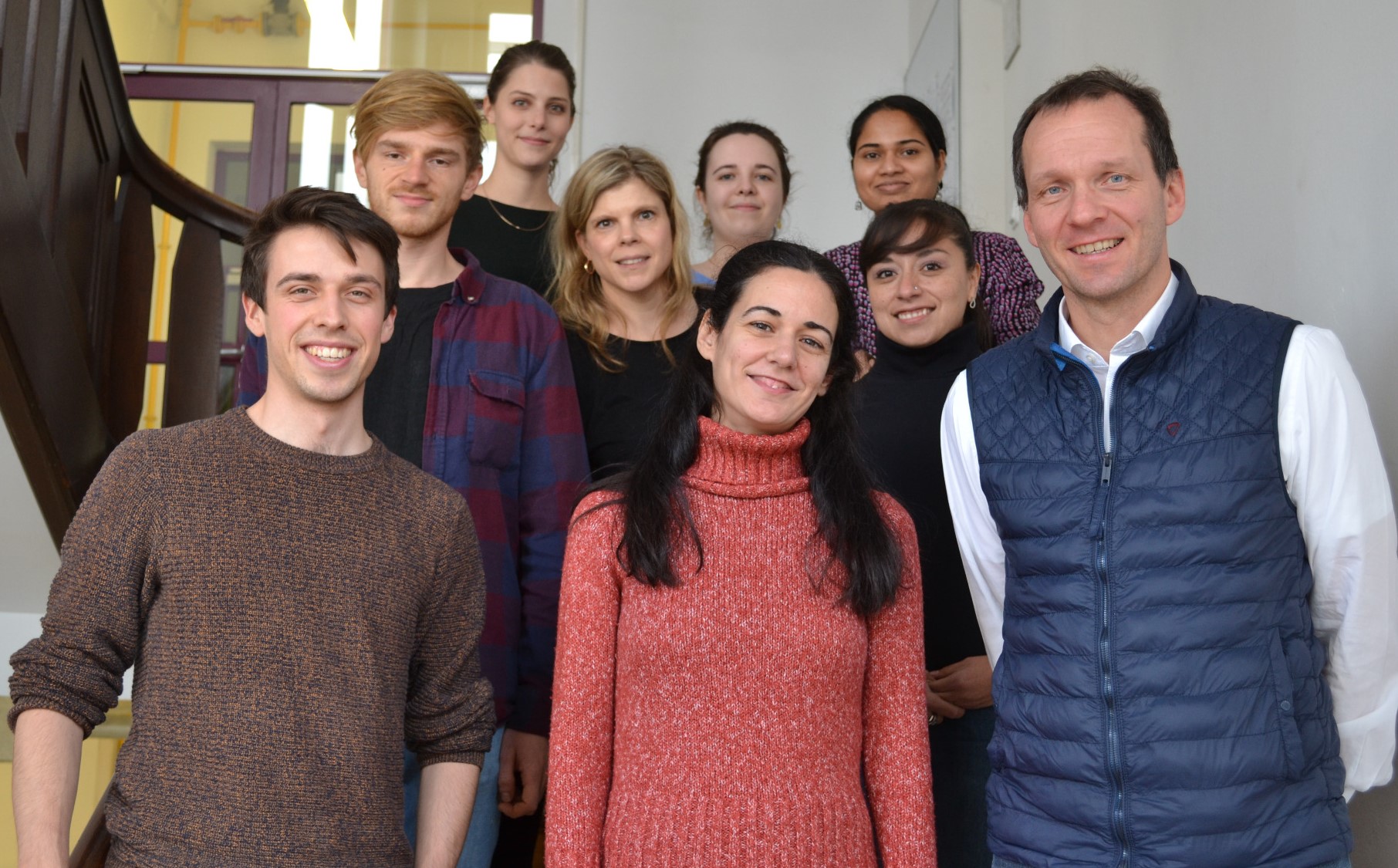 Teamwork at the Medical Microbiology Institute. Frankfurt am Main – Germany

The creative process for unraveling Bartonella adhesion to human cells has had until now many collaborators involved, starting with my supervisor and colleagues at the Medical Microbiology Institute, and continuing with the training I have received from members of the ViBrANT Team and other external research groups at the University Hospital Frankfurt.

The opportunity to share points of view with other researchers, learn different ways to address a scientific question, and networking prospects have been one of the best parts of this research experience.

Exchange of ideas is one of the greatest ways to expand your knowledge and to be able to see things from a different perspective. During this PhD adventure, I had the challenging opportunity to present my work in scientific conferences in Glasgow (United Kingdom), Paris (France), and Leipzig (Germany), receiving great inputs from experts in the biology field. Furthermore, I had the gratifying chance to discuss my research with an enthusiastic and willing for knowledge young audience from a high school in Frankfurt (Germany).

The only way to do great work is to love what you do. If you haven’t found it yet keep looking. Don’t settle

So far this PhD chapter has had many challenging and encouraging experiences. I am looking forward to seeing what is to come in the following years.

Until the next time.